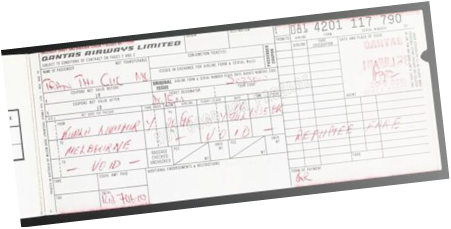 Aeroplane Ticket - Issued to Tran Thi Cuc, Qantas, Kuala Lumpur, 14 Jul 1978
The enhancement in technology in the 1950s enabled changes to travel in Australia. Larger immigration numbers and the huge baby boom gave governments the need to create more roads over our country side.

The first Australian-made car, the FX Holden, was unveiled in 1949. Production was slow until 1951, when 100 cars were being
produced every day. From the 1950s onwards, the commonwealth bank began to put large quantities of money into the construction of roads. In 1953, Holden released the FJ Holden. The new developments in motor-vehicles changed the way Australians lived. People went on holidays more often, drove to the supermarkets and drove to sporting matches.
By the 1960s, the car had become an essential part of everyday life for many Australians.

During the 1960s, the rate of road development increased to accommodate the number of cars on the roads.
In 1961, Australia’s first free-way was completed and many major highways were sealed. The Princess Highway from
Brisbane to Sydney was completely sealed, allowing motorists to have a safe, smooth trip.

The 1950s also saw Commercial air travel.
Unfortunately at the time it wasn’t popular due to the discomfort and the huge costs to fly.
Propeller powered planes gave the passenger noisy turbulent rides and unpressurised cabins.
However those who could afford it flew for the first time on a jet-powered aircraft in the 1960s.
Qantas in the late 1950’s, purchased an aeroplane called a Boeing which could carry 300 passengers at one
time.

In 1958, Qantas became the first airline in the world to introduce a regular round-the-world service.
In 1959, Qantas also offered regular flights to America, London via New York and London via
India.

Propeller powered planes started to die out in the 1960s as Jet powered planes were more
comfortable, faster and could fly at high altitudes to avoid turbulent weather.
Flights internationally and domestic became cheaper, even more comfortable and
flight times kept reducing. As a result, air travel posed a real threat to rail networks for travel between
State capitals.

The plans to complete the Sydney to Melbourne Railway was completed in 1962,
in 1966 the eastern Railway route was completed through the Avon Valley, east of Perth.
In 1968 the Kalgoorlie to Perth line was completed and in 1969,
the Broken Hill to Port Pirie standard gauge railway were opened,
completing Sydney–Perth railway.